About us
Freedom expressed through architecture. Astoria Oradea.
Astoria Grand Hotel
Luxury hotel services
Our wish is to come up to the expectations of each and every guest. It’s not an easy task, but we have made a priority in convincing everybody to return with great pleasure to our hotel.
Mirela Miclău - General Manager 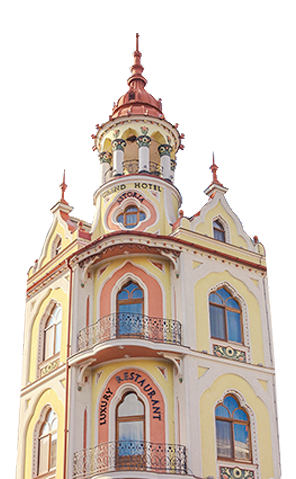 Video Tour
Video tour of our location
Our History
History develops, art stands still
Alongside the architectural poetry, Astoria Hotel was restored and was given novelty elements, combining the classic with the modern.
+

Alongside the architectural poetry, Astoria Hotel was restored and was given novelty elements, combining the classic with the modern.
+

The story behind the building

In 1902 the architect Ferenc Sztarill started the construction of the Sztarill Palace at the intersection of Pieței and Theater's streets. At that moment Sztarill was known as one of the most prolific architects, being the builder of the "Black Eagle Palace", "Adorjan House" and other projects from Oradea inspired by the eclectic style. The first floor of the building was initially designed for housing, at the ground floor being established the EMKE Cafe, a place where you could discuss anything, from literature to politics and love. This is the place where the Hungarian poet Ady Endre met his love, Adel Brull, the one that was going to be his muse, inspiring many passionate lyrics. In 1930 Sztarill Palace becomes Astoria Hotel, which only functioned for a few years, until the beginning of the second world war, only to resume its activity many years later, in 1975.
+

The most important points of interest are located downtown, a good example being the „Regina Maria” Theater, a cultural and architectural landmark. Oradea offers a lot of tourist attractions, and „Băile Felix” and „1 Mai” thermal spa resorts are only a few kilometers away from the city.
+

Astoria Hotel Oradea was built between 1902 and 1906 by the architect Ferenc Sztarill, in an eclectic architectural style with deep traces of secession.
Login Form
Register Form